October 31, 2011
Being football season, we have seen many plays and many penalties as well. Every now and then, a team will "decline the penalty." At first I was like, "hey! you can't go around declining penalties" or "I wanna decline some penalties too" but then I realized I didn't really understand the rule. So being the nerd that I am, I did some investigative work. 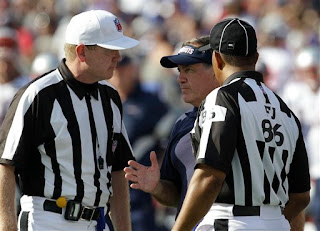 In football, an opposing team can decline the penalty of the other team.

For example, if Team A is called for pass interference and receives a 15 yard penalty, Team B can decline that penalty and let the play stand as and where it ended, if they feel that it benefits them more than that penalty would. So the referee gets on the mic and says "pass interference, defense, the penalty is declined" and the game goes on. (okay, football experts, I know it's a bit more complicated than that, but go with me here)

And I was thinking about how Jesus declines our penalty. We know that the evil one is the accuser who ceaselessly accuses us before God (Rev 12:10). And so the evil one stands before God and watches us, bringing to Him all of our faults and "penalties". But Jesus has already paid the price for our penalties, He paid it with His blood. The new and everlasting covenant was made in and with His blood.

He took on our penalties- our pass interference, our roughing the passer, our offsides and He declines the penalty because He wants to be with us. He doesn't want our penalties to separate us from Him. 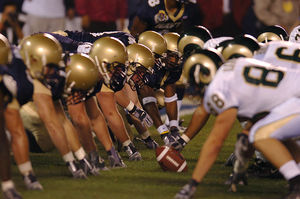 Amazing. I love that.

We receive this mercy by confessing our faults and turning away from darkness and sin toward the Light.We enter most deeply into Him when we receive the Eucharist.

I don't think I will look at football quite the same ever again :)