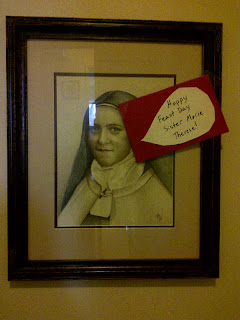 SEATTLE- (SMJ)--- Shock and awe came over a crowd of nuns when a picture of St. Therese spoke to one of the novices in the form of a dialogue bubble on her feast day.

"We have had this picture of St. Therese for years, " one Sister commented "but she has never spoken to us before, this is truly unprecedented."

The Sisters awoke on the morning of October 1st to witness the dialogue bubble that appeared some time during the night.

"Many statues and icons have displayed supernatural characteristics in Church history" said a Church historian.

He went on to say, "We have seen statues weep but we have never seen a dialogue bubble before. Perhaps this is the Saints way of embracing a new means of social communication."

Rumors flew about the crowd that St. John Bosco will begin texting on his feast day and that St. Anthony would probably establish a Facebook page. However, no one could confirm the authenticity of the rumors.

St. Therese could not be reached for comment and the Vatican has not returned our phone calls.

No one credible contributed to this ridiculous story

Anonymous said…
That is hilarous! I can't wait for St. John Bosco's text!!! and to like St. Anthony's facebook page!!
1:46 PM